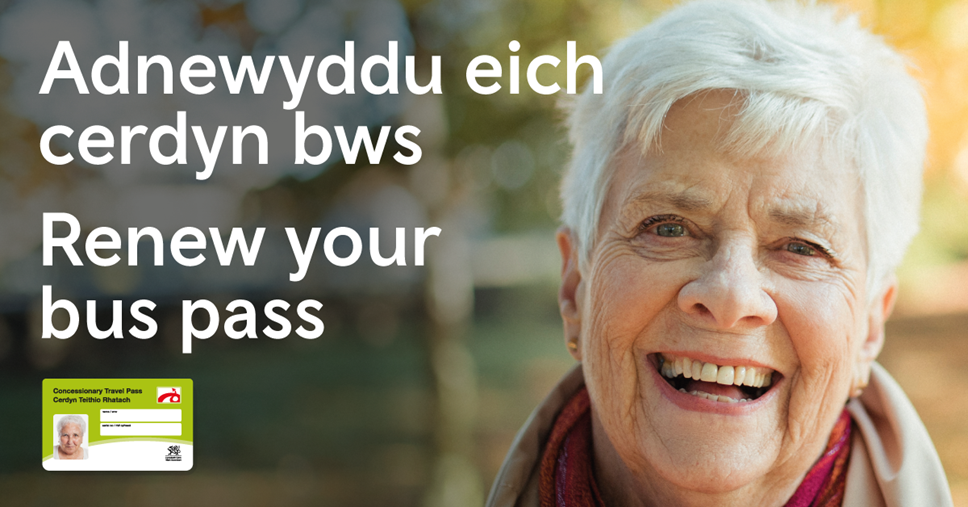 11 September 2019 saw councils across Wales and Transport for Wales launch one of Wales’ largest public engagement programmes aimed to renew all green coloured bus passes across Wales. The response has been exceptionally high with thousands of bus users wanting to apply for their new- style cards straight away.

UPDATE: Following extensive user testing, as of Monday 23rd September,  the TfW online application portal for bus pass renewals is now back online. This can be accessed by going to www.tfw.wales/travelcards .

Transport for Wales’ absolute priority is to ensure people have the fastest and most convenient options for renewing their bus passes. Having listened to feedback from their partners in Age Cymru and the Older People’s Commissioner’s Office, with whom they’ve worked closely right the way through this project, they’re making sure people can get application forms easily.

Applications forms are being distributed from mid next week to those that have already requested them, and there is already a PDF version available on TfW’s website, to allow people to print them at home.  Paper forms are also being distributed to all local councils so that people can pick them up in their local communities.

James Price, Chief Executive of Transport for Wales, said: “We’re working with Age Cymru and the Older Person’s Commissioner to make sure we offer the right level of support for those most in need. The feedback has been that paper copies of the application remain in high demand. Paper copies have always been an option for people to apply and available by contacting our help desk. However, taking on the concerns that we’ve heard from older people this week, we’re making sure that copies are available from local councils, such as libraries and community hubs and people can download a copy from our website www.tfw.wales/travelcards”.

Age Cymru’s Victoria Lloyd said: “At this stage we would urge older people not to panic about renewing their passes. The deadline is not until 31 December so there is plenty of time to make the application. We are pleased that Transport for Wales will be making paper versions of the application forms available in each local authority in Wales as well as with a number of charities supporting older people. If anyone is worried about making an application, help and support is available from the Transport for Wales helpline or other support agencies.”

Older People's Commissioner for Wales, Heléna Herklots CBE, said: "Many older people throughout Wales have told me that they depend on their bus pass, which enables them to get out and about, stay socially included, remain engaged with their communities and access essential services such as shops and health services.

“As the application process for renewal will mainly be online, something that will cause some concern for older people who do not use the internet, I expect local authorities to offer help to older people by providing paper application forms where these are required, or the necessary support so that applications can be completed on an individual's behalf if this is required."

Transport for Wales is continuing to work with local authorities and across community organisations, such as Age Cymru to make sure there’s plenty of support available to those who are anxious about applying.

The website has been taken down to allow us to increase the capacity of the website significantly so that the online service can be resumed as soon as possible. In the meantime, Transport for Wales is thanking people for their patience and advising them not to worry as there’s no urgent need to renew. This is the first week of the renewal programme which runs over the next 3 and half months – current bus passes are valid until 31 December 2019.

The old-style cards will be accepted until 31 December 2019. Cardholders are advised to reapply for their new-style card in plenty of time before the end of the year to ensure can continue to receive the benefits of concessionary travel.

The new-style cards offer the same free travel rights and benefits as the current cards. The new cards are designed so that they can work as part of an integrated travel network in the future.

Transport for Wales is managing the reissue on behalf of Welsh Government, who is working as the agent of all 22 local authorities in Wales. All local councils still own the Concessionary Travel schemes.

Welsh Government’s proposal to align the Concessionary Travel eligibility age in the future with that of state pension age aims to ensure that the scheme remains sustainable in the longer term and is targeted at those most in need. The eligibility proposal will not affect current cardholders – no-one will lose entitlement to their card and its benefits in the future nor will it affect a pass holder reapplying for a bus pass for use after 31 December 2019. 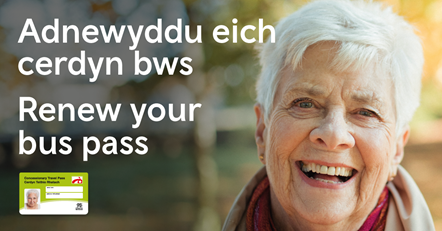