Transport for Wales was delighted to be recognised in the Wales Transport Awards with two successes.

The transport operator, who took over running the Wales and Borders network two years ago this month, won the Excellence in Technology and Innovation and Apprentice of the Year Awards.

The awards saw finalists from across all parts of Wales compete for 11 awards in a variety of different categories, ranging from Coach Operator of the Year to Transport Team of the Year.

Fleet apprentice Joshua Lane was named apprentice of the year, while the Transport for Wales Operational planning team won for their Automated Intelligent Video Review cameras.

“We’re absolutely thrilled to win the Excellence in Technology and Innovation Award tonight.

“Putting innovation first is part of our core philosophy at Transport for Wales Rail Services as we aim to give our customers the best service possible.

“Our AIVR cameras are changing the way we map our network so we can address problems sooner to keep more customers moving, safely.

“We’d like to thank our innovation partners at One Big Circle for their work with us on the project as well as our operational teams and Network Rail colleagues.”

Fleet Engineering Manager Rowan Phillips has worked with Joshua Lane throughout his apprenticeship. He said:

“We’re so pleased that Josh has won the apprentice of the year award.

“Apprenticeships are incredibly important to our vision at Transport for Wales, investing in young people as part of the wellbeing of future generations.

“Having just completed the third year of his rail traction and rolling stock engineering apprenticeship, Joshua has shown true ability, professionalism and commitment to our values - he also displays a fantastic thirst for knowledge!” In addition, Transport for Wales also wants to praise Tianna Morgan-Seivwright, who made the final shortlist of the Women in Rail’s Apprentice of the year category at the end of September.

The successes are testimony to the hard work of multiple people across the organisation and are a clear sign that TfW’s aims of investing in new technology and its apprentice programme are paying dividends.

“Although we couldn’t get to celebrate in person with everyone I am so pleased we were still able to recognise these amazing companies who keep Wales moving, especially after such a difficult year.

“A huge congratulations to all the winners as well as each of the finalists who are also recognised for their hard work and the success this has delivered for them.

“My thanks go to this year's sponsors including our headline sponsor Keolis Amey Wales, for their support this year with moving the awards online and helping us to shine a spotlight on the industry and the people in it that work tirelessly to ensure the smooth running of business in Wales."

TfW partnered digital innovation company One Big Circle to introduce Automated Intelligent Video Review cameras on trains, which identify problems on the line quicker than ever before and can also be used for driver training.

The online event was sponsored by KeolisAmey, who operate Transport for Wales Rail Services, and included a message of thanks from the Secretary of State for Wales, Simon Hart MP. 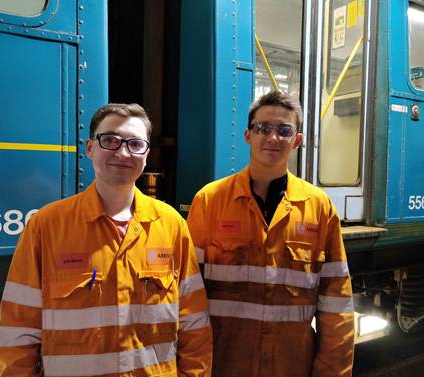