Transport for Wales has begun work to transform the appearance of Wales’ busiest station as part of their Station Improvement Vision.

TfW is delighted to confirm the major redecoration work at Cardiff Central is now underway. Trio Building Contractors have been appointed as the preferred contractor to deliver the work, with additional safety measures being implemented for protection against Covid-19.

The work began on Platform 0, before moving to Platform 8. It includes redecoration of all existing painted surfaces such as fences, building doors and window frames, lampposts, signage, barriers and handrails.

The painting will be done in the existing heritage colours of the Great Western Railway due to Cardiff Central’s listed building status and to reflect its historic status as part of Brunel’s iconic route from London to Wales.

“Cardiff Central station is the gateway into our capital city and our busiest station.

“It’s great to be progressing with major redecoration work and implementing our Station Improvement Vision as we continue to transform transport across Wales and the Borders.

“Covid-19 has presented many challenges, but as a result of low passenger numbers, we have pushed forward with our minor improvement works programme across the network and as part of our Station Improvement Vision we’ve also installed bike storage units at Abergavenny station and are currently installing new cycle storage at Frodsham and Helsby.

“We are following all safety guidance and measures, but are continuing with our transformation works to improve transport for the people of Wales and the Borders.”

The work follows the installation of additional ticket barriers, subway improvements, new ticket machines and a refurbishment of the clocktower last year by Network Rail and Transport for Wales.

Last year also saw the creation of two dedicated passenger assistance meeting areas at the station and a major overhaul of signage.

Originally opened in 1850, Cardiff Central was given a major overhaul in the early 1930s by the Great Western Railway’s chief architect Percy Emerson Culverhouse. It saw the arrival of the station’s iconic art deco style which is still visible today, some of which mirrors the work Culverhouse did on Bristol Temple Meads station.

“We’re really pleased to see the start of this work which will improve the station environment for our customers massively.  A lot of hard work has gone into planning this project.  The work will take place over a number of weeks to ensure as little disruption to customers as possible.

“We saw more than 14 million people coming through Cardiff Central last year which shows just how important it is to our network.”

“We all know how important Cardiff Central is as the gateway to our capital city, and with some targeted investment we know we can get it looking its very best. As part of our Station Improvement Vision, we’ll be transforming the look and feel of all of our stations. We’ve been working closely with our partners in Network Rail on this and together we can really make Cardiff Central a station to be proud of.” 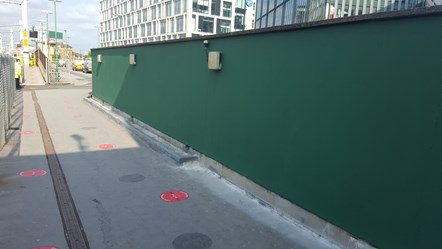