Wales has been a world leader in transport for over 200 years. To thank you for staying at home, we have taken a look back through the archives to find out more about some of the greatest landmarks in the history of the development of our public transport networks.

1793: Pont-y-Cafnau
The world’s oldest known iron railway bridge was designed and built in 1793 by Watkin George, who was the chief engineer for the Cyfarthfa Ironworks in Merthyr Tydfil. Cyfarthfa was the world’s largest ironworks at its peak, and from the late eighteenth-century, it built its own tramway to bring limestone from the Gurnos Quarry to the blast furnaces. Over 200 years later, it is still standing, having long outlived the tramway itself, though today it is used by pedestrians rather than trams.

1804: The Penydarren locomotive
A short distance away in Merthyr was the Penydarren Ironworks, who built their own tramroad in 1802. Running parallel with the current railway line, it ran down the Taff Vale to link with the Glamorganshire Canal in Abercynon. Soon after opening the Cornish engineer Richard Trevithick put a static steam engine onto wheels, creating what would become the world’s first steam locomotive to successfully haul a train in February 1804.

1805: Pontcysylle Aqueduct
Thomas Telford was one of the most brilliant early engineers, who achieved some of his greatest feats in Wales and the Borders region – the town of Telford is named after him. In 1805, work was completed on his masterpiece, the Pontcysyllte Aqueduct. Designed to take the Ellesmere Canal across the wide valley of the River Dee, it took ten years to build and remains the highest canal aqueduct in the world. In 2009 it became Wales’ third UNESCO World Heritage Site as one of the world’s most significant historic structures.

1807: The Swansea and Mumbles Railway
Running along Swansea Bay for five-and-a-half miles, the Swansea and Mumbles Railway was the world’s first fare-paying passenger rail service when it opened in 1807. Initially a horse-drawn tramway, it was first converted to steam power in 1877 and then to electric power in 1929. The line linked some of Swansea’s most famous sites including the city centre, St Helen’s rugby and cricket ground, Swansea University, Oystermouth Castle and the Mumbles Pier. However, with the emergence of buses after the Second World War, trams fell out of fashion and the line was closed in 1960.

1832: The Ffestiniog Railway
After nearly 190 years in operation, the Ffestiniog Railway is the world’s oldest-surviving railway company. The line between Porthmadog Harbour and the slate quarries of Blaenau Ffestiniog was built to two-foot narrow gauge so that it could twist and turn through the scenic foothills of Snowdonia, and special articulated locomotives were designed by engineer Robert Fairlie to haul trains. After closing in 1946, the company was rescued by enthusiasts, who painstakingly rebuilt the line over the next 36 years. Today it’s one of our most famous tourist attractions and the company operates the largest heritage rail network in the UK, including the Welsh Highland Railway between Porthmadog and Caernarfon, and TfW is proud to work closely with them.

1848: The Irish Mail
The Flying Scotsman, The Cornish Riviera Express, The Golden Arrow, The Gerald of Wales: Britain has produced some of the world’s famous named trains – scheduled services that carry a distinctive name to increase their prestige. The world’s first named train was the Irish Mail, which carried passengers and mail from London’s Euston station and Bangor from 1 August 1848. The completion of Robert Stephenson’s Britannia Bridge in 1850 allowed it to run through to Holyhead. While services no longer carry the famous name, direct trains between London and Holyhead continue to run, being operated by our industry partners Avanti West Coast.

1857: Crumlin Viaduct
In the nineteenth century, Ebbw Vale became one of the centres of the Welsh steel industry; in 1857, it produced the world’s first steel rail. Further down the Ebbw Valley, a new railway was taking shape which would link this valley to several others. The Taff Vale Extension Line ran between Pontypool and Neath for over 100 years until its closure in 1964. The line required the building of several large viaducts, the largest being across the Ebbw Valley at Crumlin. At 200 feet high, this enormous iron structure was the highest viaduct in the UK until it was demolished due to corrosion between 1966 and 1967. Its last role was for scenes in the 1966 film Arabesque, starring Gregory Peck and Sophia Loren.

1886: The Severn Tunnel
Until 1886, trains between London and South Wales had to run via Gloucester, crossing into Wales over Isambard Kingdom Brunel’s 1852-built bridge over the River Wye. But a more direct route was long desired, and in 1873, work began on a tunnel underneath the Severn Estuary. Construction was challenging due to flooding, requiring the building of permanent pumps which are still operational today. The first trains ran through the tunnel in December 1886, marking the end of work on one of Britain’s greatest engineering feats. It remained the longest underwater tunnel in the world for over 100 years, and it even has a TfW station named after it! 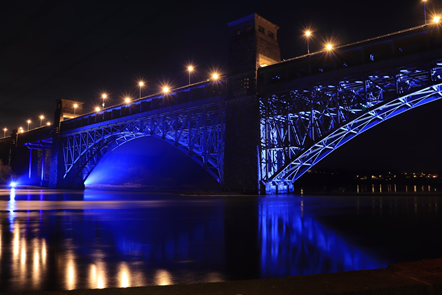